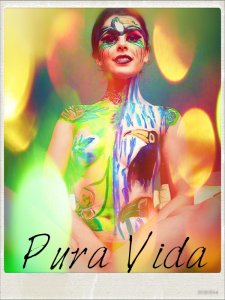 I know it has been a while since I wrote my last article and since then I have been in a much happy place in my head and even physically since I started travelling more this year.

We had one of the worst winters in Canada this year and after three crazy months of camming hours and barely leaving my apartment and sleeping through daylight hours I decided to just go away to Costa Rica.

I had never been there before. Usually if I am craving sun and warmness my choice would have been Mexico but I felt slightly more adventurous this time. (I know for most of you Mexico would be quite adventurous but let’s just say that the mystery behind a new place I had never seen was scary and exciting= adventurous in my books)

So I started looking online for rental homes. I found that Costa Rica was not as affordable as Mexico. Homes that were private and had a non shared pool were in the $4000 USD/month or more for short term rent. I didn’t want to spend that much so wanting privacy for camming and having a non shared backyard made my search quite frustrating. After a few days of looking I booked a house that looked reasonable. The next browser tab to my rental confirmation was my flight booking so it seemed like most of the planning had already been done. I usually don’t like to plan things too much. I don’t know if it is because I have high expectations and I don’t like the feeling of disappointment or I just have better experiences when I try to go with the flow and improvise. Either way most of my best memories in life have been a result of very spontaneous events that had very little planning.

I had 6 h to catch my flight… I had not slept for 12h, not packed, not cleaned my house (there was dirty dishes and food that would go bad if I had left it there if I were to go away for a month… yes I had made that mistake before once…. ooops ), and I had not cammed. How the heck was i going to fit all that in 6 hours… Another thing that I am known for is leaving things until the last moment. I know I would be more productive If i did that less but there is something about performing under stress that I like. Maybe it’s the adrenaline high… I still managed to do all that (minus the sleep) and had 10 minutes left for packing after I had turned my cam off. It was exactly 10 minutes on the clock and if I didn’t pack on time I was going to miss my taxi waiting for me, and then my flight! I was very sure I had forgotten stuff but all I cared about at that point was to make it to the gate on time. At least I had my passport and laptop with me :). If worse came to worse and I didn’t have enough of a variety of clothes for my camming shows I would have just worn the same outfit inside out the next day haha!

After a long flight and very sore back and failed attempts to sleep (for those of you that don’t know I have neck and back problems so sitting in a plane for hours was pretty painful) I made it to this mysterious land called Costa Rica where I knew nobody and I didn’t even know where the hell I was supposed to go. Apparently most places in Costa Rica don’t have addresses like we do in Canada and the US. They would literally describe a place like: 200 meters from the mango tree, turn left, pass the traffic light and the house is 200 meters on the right…. Hmmm okay!!!!

So as you guessed it, the real estate agent had not given me an address bu had told me there would be a car waiting got me at the airport. There was no car and I had to figure out how to get out of there. First thing I try to do is call her and she does not pick up. I started freaking out. I spoke zero Spanish… Cerveza, Hola and guacamole don’t count… I hope I spelled those right…. Ok, so back to the airport… I was approached by a ton of taxi drivers. They spoke English…Great!! One guy asked me where I was going and I said I didn’t know. Then I showed him the booking confirmation email and he found the general area and after a couple of tries on the phone he managed to speak with the agent so I was able to find the house after all.

There was one thing about Costa Rica that I will never forget… It’s not the tropical island, the monkeys hanging out in trees and the beaches, although those were very nice. The DRIVING!!!!! They drive on the right so that was the same as in Canada but the rule about driving there was that there was no rules! It was an adjustment getting used to people cutting you off, paved roads suddenly becoming rocky trails of 45 degrees sloped mountain roads with GPS all of a sudden getting confused and not knowing where to go.

Almost every time I was on the highway I would see at least one accident blocking the traffic. In Costa Rica they use a term called Tico time (Tico= Costa Rican). Tico time means that it could mean 15 minutes late, 1h late or maybe 5… Apparently you are not supposed to move your car if you get in an accident there until the police gets to the scene. So since the police may follow tico time, it just means that you will be stuck in traffic for hours until they arrive. Good luck if you have no AC or an emergency! I didn’t so it wasn’t too bad but still inconvenient.

Since we started talking about the locals or ticos as they call themselves, I found them to be very friendly and approachable people. Some lived in very expensive places and drove expensive cars and some had more modest homes, but I noticed that almost noone spoke English. I had to make good use of google translate to help me call taxis (remember I didn’t have an actual address so trying to explain where to pick me up was a nightmare). I found that my Italian/French language background helped in understanding some Spanish and I would say things back in Italianish/ Frenchish 😀 They probably all though I sounded retarded but it’s all good, I was able to manage my way around for the most part. I purposely did not want to be in a touristy town so I could get a real taste of how the locals lived. I do not regret that decision at all!

Another thing that I noticed was the cost of living to be much higher than I expected. Dining out, real estate, cars and almost everything that was imported was much more expensive than in Canada and the US. ($10 for 6 plumbs) Wages for people are lower. A cleaner makes $4-$7/h. I am not sure about the minimum wage there but that is not enough money for a tico to be able to afford a car, eating out and buying imports. How do they do it? It is customary for Costa Ricans to live with their families until they marry. Some use the bus and some drive motorcycles… Yes they were very loud and old!!!!!!!!!!! The motorcycles I mean, not the Ticos. However the upper class lives in expensive condos/million dollars haciendas and drives imported cars that cost a lot more than we would buy them in the US and Canada.

Ever heard of Costa Rican Coffee? It’s a very hyped coffee in North America, or at least that’s the impression I have. Being a bit of a coffee snob myself, I was excited to try it.

I was surprised to see that there were very very few coffee shops among the neighborhoods where the locals (the ticos) lived. I guess everyone made coffee at home or they just were so bored of it that they didn’t need to have coffee shops for locals. Most of the places where you could find it were in high end malls and plazas. Surprisingly it cost just as much as it costs in North America… But don’t we import their coffee? Shouldn’t it be cheaper there? The taste of coffee was super fresh and the aroma was like a mini orgasm to your smell senses 😉 Did i just say that haha…

The coffee machine they had at the rental home did not disappoint either. For the first time I was happy to drink coffee at home that did not come from a tassimo or a keureg (I don’t know if I spelled that right… speeling is not quite my thing).

If you are a camgirl and you are reading this, or if you are generally concerned about internet speeds, the speed in Costa Rica was more than sufficient for camming. I usually bring a very long ethernet cable with me wherever I go and that had quite a bit of use while I was there. We had power outages a few times and that affected the internet but that only lasted less than an hour and it only happened one day. Earthquakes and volcano ash were other occurrences that happened while I was there. Volcanoes were definitely a new experience for me, but not earthquakes (I spent a lot of time in Southern Europe). Most Costa Rican buildings apparently have a strict building code, so the whole experience was not as scary.

I think I will definitely be returning to Costa Rica some day. The friendly locals, the nice weather and the serenity of the mountains (minus the motorcycle noise) did wonders to help me forget about my Canadian winter blues. It wasn’t the perfect place (no place is) but it was perfect for my mood and even my income got better because I felt happier being in the sun.